"We are pleased to inform you that this matter has been resolved. Your input and expertise were critical to this resolution, and we appreciate the many hours that you put into this case…. Again, thank you for your time, patience and cooperation."
— Client Comment
"Thank you. I enjoyed working with you and appreciated how prepared you were in this matter!"
— Client Comment
"Please be advised that the case has been settled. Only by the willingness of experts of your stature to come forward and render objective opinons can cases like this one be resolved in a truly equitable fashion. On behalf of our client, thank you again for your willingness to participate in the resolution of this matter."
—Client Comment
"I appreciate your efforts in this case and will retain your name and contact information for future cases."
— Client Comment

A patient had a carotid endarterectomy and subsequently developed an enlarging neck hematoma. The issue in this case was to determine at what time the nurse should have called the surgeon as the patient began to exhibit ominous signs of a compromised airway.

A patient was discharged with a tracheostomy and was comfortable with all tracheostomy care. Before discharge, one of the family members requested training about tracheostomy care, and this was scheduled after discharge by the home care nurse. The issue in this case was to determine whether or not the hospital had an obligation to offer teaching to family caregivers before discharge.

An elderly patient on blood thinners fell and was admitted to the emergency room, where a nasal packing was placed to stop a significant nosebleed. He returned to the hospital three times during the same day, after having pulled out the packing. Two of the issues in this case were to determine whether there were safety precautions that could have helped to prevent the patient from pulling out the packing and whether nurses followed proper protocol for administration of blood.

A patient had a tracheostomy tube placed to maintain the airway during treatment for mandibular cancer and neck dissection. At one point, the patient partially coughed out the tracheostomy tube. The issue in this case was to determine whether the staff acted appropriately to provide mask ventilation while efforts were made to replace the tube.

The issue in this case was to determine when the patient became septic, when interventions should have begun, and whether nurses followed chain of command when the vital signs changed.

A patient with a laryngectomy due to end-stage laryngeal cancer had a known fistula near the stoma and had several prior episodes of hemorrhage. The issue was to determine whether, prior to the last episode of hemorrhage, he should have been transferred to the intensive care unit or to another hospital, where he had been receiving all of his care. 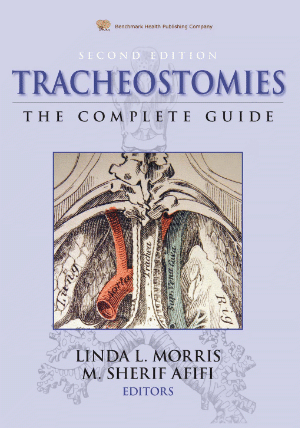 New Book
Dr. Morris is pleased to announce the publication of her new book, Tracheostomies: The Complete Guide (2nd ed), 2021.
Purchase at Amazon.